When we are exercising we aren’t always sure how hard we should be working or even how to gauge it. A very simple tool you can use is the RPE scale ‘Rate of Perceived Exertion’.

RPE also known as the Borg scale, named after Dr Gunnar Borg who designed the original scale, is a very simple tool that uses a number system to give you an idea of how hard you are working. It has been modified a lot over the years and many fitness professionals have devised their own modified scale that works for them, as have we. The original scale was 6-20. The bottom number 6 represented resting and the top number 20 was maximal intensity. Some of the research carried out on RPE found that if you added a zero to the end of the number chosen then it correlated pretty well to the individuals heart rate.

Since then most coaches and trainers have modified the scale to a 1-10 or a 0-10. The bottom of the scale being 0 or 1 and the top of the scale being 10. At Storm Fitness Academy we have also adopted this method and used the numbers to relate to moderate exercise and vigorous also to help individuals plan in their weekly exercise goal. 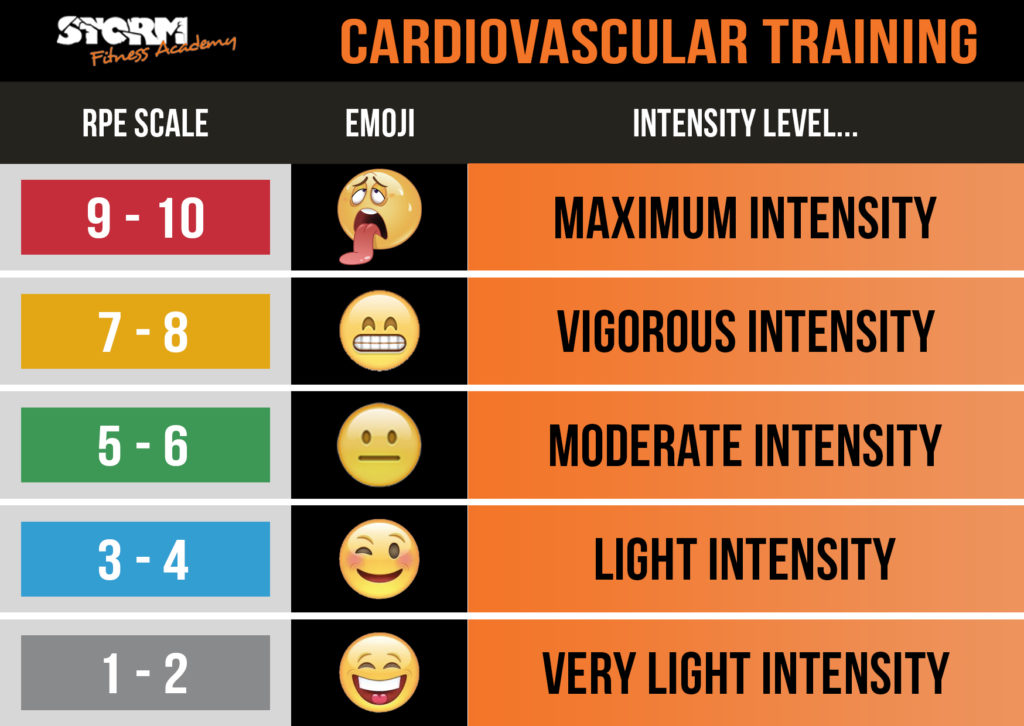 How hard should I be working?

Well, as always it is very difficult to give a simple answer to this but I will have a go. Most of us are aiming to live longer, healthier lives. As discussed in a previous article research suggests that 150 minutes of moderate exercise a week, or 75 minutes of vigorous exercise a week, or a combination of the two will significantly improve your health and reduce the risk of suffering from numerous life threatening medical conditions. So I would say that is a pretty good start.

Numbers 9-10 are not necessary on a day to day basis as they require you to work to maximal exertion, which can require 1-2 days of recovery. We tend to work in the 9-10 range if we are competing or carrying out some maximal exertion test. So once you have warmed up using the bottom numbers 1-2, 3-4 you would then be aiming to workout around numbers 5-6 if you want to work at a moderate intensity, or if you want a challenge and some faster improvement in fitness you will aim for numbers 7-8.  So next time you are exercising have a look at our scale above and ask yourself which number best represents how you are feeling and whether that matches your goal/aim.

One thought on “Rate of Perceived Exertion (RPE) – Cardio Training”